A safe place to read, write, and repeat.

I’m definitely stating the obvious here, but 2020 has really sucked. For starters, we continue to live through a pandemic that has taken the lives of so many worldwide, and dramatically altered life for all of us lucky to still be alive. Wildfires ravaged the state of California this summer. In the best case scenario, one couldn’t step outside for coffee or a short walk around the block for weeks on end. In the worst case scenario, your house and all your property was burned to the ground. We woke up to ORANGE SKY as our state burned (over 4,359,517 acres):

In case a pandemic and wildfires weren’t quite enough, let me not neglect to mention that Americans watched and protested the brutal killing of racial minorities at the hands of the police. We continue to grapple with and fight against the horrifying reality of racism and police brutality in America, including our own complicity in the system.

Nope, I’m not done yet! We also had an election that felt like citizens were voting not for the leader of the executive branch, but for the existential future of America, bringing the political chasm between Americans into sharp focus. At the time of this writing, our President still hasn’t conceded the election or accepted its results, even after numerous recounts have been completed in swing states. Who remembers this monstrous debate:

I know others are feeling the effects of these macro changes far more keenly than I, as changes to employment, work from home, companionship,  and domestic abuse have taken hold. This graph from CDC says it all: 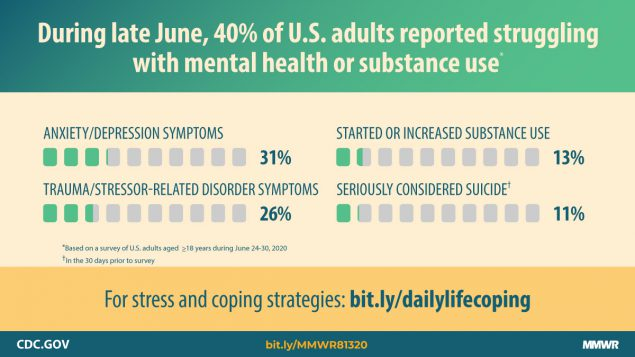 Despite the innumerable blessings in my personal life and immediate sphere, I’ve spent significant time this year mired in existential angst about the state of the world, my country, and my state. It’s been exceedingly difficult for me to think positively about the trajectory of mankind.

Strangely, the one thing to help has been, well…focusing on the facts! In the midst of my 2020 wallowing, I was lucky to re-read Factfulness, a book by international-health professor Hans Rosling. I first read this book as part of a book club at work, where I enjoyed reading it but never really internalized it. However, in the wake of the mess(es) I’ve written about above, the title “Factfulness: Ten Reasons We’re Wrong About the World – and Why Things Are Better Than You Think” took on new meaning and hope.

Re-reading the book provided much needed perspective. The book’s main thesis is that, despite what we read when we open our inboxes and what we hear on mainstream news media, the arc of the world is, in fact, inexorably bending towards prosperity. Cynicism may be in vogue nowadays, but facts are facts, and in a pragmatic and level headed manner, Rosling makes his case that the world is not so bad. By the end of the book, one is forced to concede that there is much to hope for and continue working towards.

Let’s take a quiz, shall we?

“In 1996, tigers, giant pandas, and black rhinos were all listed as endangered. How many of these three species are more critically endangered today?” – Factfulness, pg. 5

Go on, take a guess!

Okay, let’s try another one.

“Worldwide, 30-year-old men have spent 10 years in school, on average. How many years have women of the same age spent in school?” – Factfulness, pg. 5

What do you think?

If you guessed correctly, that’s amazing! If you didn’t, you’re not alone – I got both of these questions (and many, many others) wrong too. I’ve never been so pleased to answer a test question incorrectly! In 2017, Rosling asked nearly 12,000 people in 14 countries to answer a set of 12 questions pertaining to the current state of the world, and on average respondents answered only two correctly. Rosling hilariously points out that these results are worse than a monkey randomly guessing, as a one in three chance question should see respondents correctly answering at least 4 of the 12 questions.

These abysmal results suggest that users are not just ignorant and lacking education, they (we) fundamentally misunderstand the basic facts of the world we live in. Thanks to humankind’s inherent biases toward polarization, comparison, and negativity (yikes!), exacerbated by the media’s incentives to hack these biases to sell news stories and compete for our attention, we are grossly misinformed.

The Roslings take on the task of reducating us through eleven chapters. Each chapter tackles a different human instinct, suggests methods to combat these instincts, and systematically proves how much better the world is than we think. In 2020, there could be nothing more welcome.

“The negativity instinct” chapter was especially interesting, as it examined how humans focus on the negative and view the past with rose-tinted glasses. In surveys, the majority of people believe that the world is getting worse, but this is largely untrue. Many, many things about the world are trending overwhelmingly towards the better, in large part because people have worked for them to become so.

Take, for example, extreme poverty! The rate of extreme poverty has dropped precipitously in the last 200 years, and never has it dropped as quickly as it has since the turn of the century.

In India, for example, in 20 years (1997-2017), the extreme poverty rate dropped a whopping  30%, from 42% to 12% of the population. This is heartening to the many nonprofits around the world who work towards a more equitable future in the country.

Here are some other charts that are trending in a very happy direction:

The book, and in particular the charts I’ve shared here (there are many more delightful ones in the book), are due in large part to the efforts of engaged citizens, and they’re the happiest ‘educational content’ I’ve seen all year – I hope they make you happy too! I began this blog with a long, long list of the negative immediate events I’ve focused on, but I’m practicing shifting my frame of reference to be more realistic (and therefore, more positive). If you, like I, have also had some low moments this year, I highly recommend you make this the one book you read before 2020 is over. Personally, this book helped me shift into action mode and become more invested in tangible, small steps that I can take to perpetuate these great trends (and others!) in the right direction. More than any Netflix holiday movie binge, Factfulness will lift your mood and help you snap out of a negative mindset.

Despite the fact that the instincts that lead us to believe the world is degenerating are somewhat endemic to human nature, it’s nonetheless in our best interest to examine them and overcome them as best we can. If we are not able to successfully do so, the resulting framework and basic understanding of the world–not to mention the cynicism!–leaves us more stressed and less capable of facing present challenges. Indeed, if we cannot appreciate how our collective and individual efforts ladder up to tangible and astounding improvements over generations, we lose our will to continue in these efforts. Though 2020 has been challenging, we must never forget that humanity overall continues to grow and improve.

Tim Ferris’ new book, Tribe of Mentors provides therapy and motivation to nudge you towards success

Hate books? These steps can help you grow from a non-reader to a bookworm soon